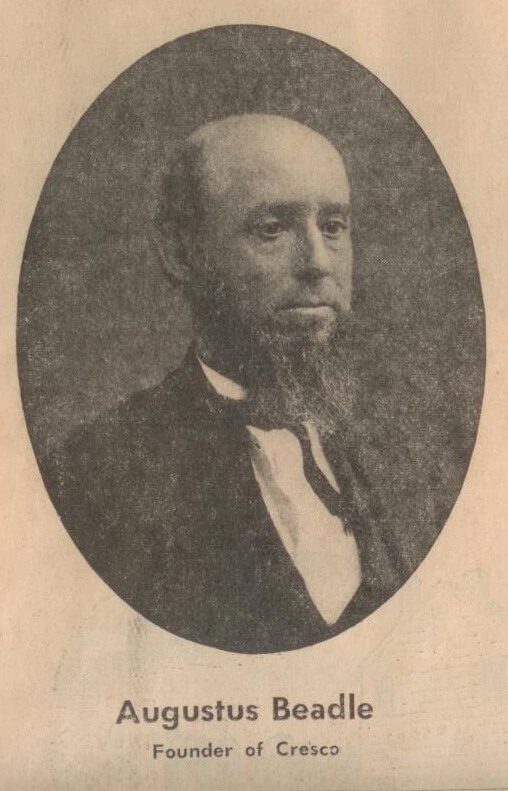 The Man Who Founded Cresco

Augustus Beadle was born October 7, 1820 in Poughkeepsie, New York. He attended college at Rutgers in New Jersey and received his Master of Arts degree.Augustus married Eliza M. Parker of Hyde Park New York at St. James Episcopal Church, Hyde Park, June 1847. Augustus became the president of the Kingston Academy in Kingston, Ulster County, New York and Eliza was the principal. Although they enjoyed their positions and work at the academy, Augustus began thinking of moving west

A trip was planned to look at land in Iowa. Beadle chose land in Afton Township, Howard County and the Beadle family; Augustus, Eliza, and their daughter Emily rode the train from New York to Dunleith (now East Dubuque), Illinois in 1855.  From their the Beadle family rode the 'steam ferry' across the Mississippi River to Dubuque, Iowa. The last leg of the trip was 115 miles on the 'M.O.Walker stagecoach stopping along the way in McGregor, Decorah, and finally New Oregon, Howard County. The family stayed in the first hotel in Howard County at New Oregon which was owned by S.M. Cole who was an agent for the stage line.

The Beadles bought many acres of land in Howard County, they made their home on a 160 acre farm in section 35 just west of Busti in Afton Township. (Busti eventually gave way to the new town of Elma just a mile or so away when the railroad came to that area). Augustus and Eliza's children Charlotte, John, and Edward were born in Busti, Howard County. The Beadles bought their supplies for the family in McGregor or Dubuque at first and Eliza was said to have driven oxen to Dubuque herself to get supplies. This trip would have taken two weeks.

The Beadles and their laborers, Henry and Hervey Axtell and James Irwin, raised over 1,000 sheep and many acres of wheat. They threshed the wheat with a threshing machine powered by horses and the wheat straw was used to cover a shed made of poles to protect the sheep in winter. Transporting wheat to market turned out to be very expensive for Howard County farmers. One year, hauling 3,000 bushels of wheat cost so much to transport, Augustus didn't make any money when it was sold. Hearing the McGregor Western Railroad was expanding west, Augustus worked hard to get it to come to Howard County. He and some friends wrote a book in 1862 titled; MEN OF NORTHEAST IOWA: Can We Have a Railroad? Read! Think! And Act!

Augustus moved his family to the eastern part of the county, Vernon Springs Township in 1866. Finally the railroad made its way to Howard County and Augustus Beadle bought land in April 1866 from M.L. Shook to make a new town for a railroad stop. Beadle sold part of the land to B.H. Edgerton and W.V. Strong. Together they surveyed, platted, and laid out blocks, lots, and streets for the town and by June lots could be sold. The plat was officially filed for record, June 12, 1866. It is said Augustus named the town Cresco, which is Latin for 'I grow'. A party was held in the new depot on July 4, 1866 and a Citizens Ball was held to celebrate the railroad coming to Cresco in November 1866. The Citizens Ball was held in Cambrian Hall, Tuesday, November 20, 1866.

The Beadle family moved to their new home in Cresco in the area of what is now Kessel Park. It was said that their house was the largest and best house in the county.

With the railroad now going through Cresco, Augustus and his business partner, Joseph Slee, built a grain elevator that could hold 30,000 bushels of wheat. Opening in September 1867, a steam engine powered the elevator and they were able to move grain to storage bins. Farmers could bring their wheat to sell, grain could be stored and loaded on train cars to be shipped to places like Minneapolis or Chicago. Besides grain, people could ride the railroad and not only did the town of Cresco grow, but life became a little easier for the residents of Howard County.

A Des Moines native, John Beadle McKay joined the Army when World War II broke. He rose from Private to Lieutenant by the time his outfit reached England. As an infantry officer, he led his men onto the Normandy beaches in June 1945, winning his first Bronze Star.

Over the next several months, McKay won a second Bronze Star, two Silver Stars, the Distinguished Service Cross, five Campaign Stars, the French Croix de Guerre, and the Combat Infantryman's Badge. McKay also received five Purple Hearts, which meant he was wounded five times. On one occasion, he led a patrol into enemy territory and was credited by his superiors as being the first American soldier to set foot on German soil. He eventually became a Captain.

John Beadle McKay served in World War II and Korea. He was born June 23, 1920 and died February 12, 2006. He is buried at Section 54, Site 3635 at Arlington National Cemetery and is considered one of, if not the most decorated Iowa World War II hero.