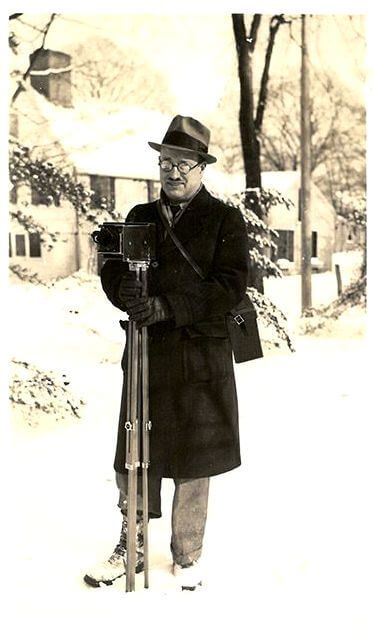 He was an accomplished etcher, lithographer, writer, teacher, and lecturer. Chamberlain taught at the Massachusetts Institute of Technology and lectured on various graphic techniques such as etching, dry point, and soft ground etching. His main residence was Marblehead, Massachusetts but, in 1929, his address was listed as Rue Jean Dolent; care of Guaranty Trust Co., 3rue des Italiens, Paris, France and, in 1934, Senlis, France.

Chamberlain studied at the University of Washington in Seattle, WA; the Massachusetts Institute of Technology in Cambridge, Massachusetts; and the Royal College of Art in London. He was a pupil of Edouard Henri Léon (1873-?) in Paris and Malcolm Osborne (1880-1963) in London. Chamberlain was a member of the National Academy of Design in New York City; the Society of American Etchers in Brooklyn, New York; the American Academy of Arts and Sciences; the Chicago Society of Etchers; Associate member of the National Academy of Design, 1939; the Northwest Printmakers; the Société de la Gravure Originale Noir in Paris; and a Guggenheim Fellow, 1926.

Exhibitions and awards include an honorable mention at the Paris Salon in 1925; medaille de Bronze at the Paris Salon in1925; a gold medal at the Boston Tercentenary in 1930; a prize at the Society of American Etchers in 1933; the National Academy of Design, annually; and the Salons of America. Chamberlain was the author and illustrator of"France Will Live Again," 1940; "Fair is Our Land," 1942;"Sketches of Northern Spanish Architecture," 1928; "Domestic Architecture in Rural France," 1928; "Tudor Homes of England,"1929; "Through France with a Sketch Book," 1929; and French Provincial Houses," 1932.

Samuel Chamberlain died in Marblehead, Massachusetts in January of 1975.