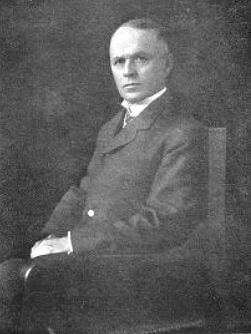 William C. Brown, a twin born in Norway, Herkimer County, New York on July 29, 1853, was raised with Christian ethics by his father, Rev. Charles E. Brown, a Baptist missionary, who started a church at Vernon Springs in 1857, and by his mother, Francis Lyon Brown, a schoolteacher and a woman of marked refinement and devoted Christain. The twins attended a one room county school taught by their father. Rev. C.E, Brown started churches in Cresco and Lime Springs where W.C. at age six rode along with his father and met a new playmate, Ella Hewett, his future bride.

Ella lived in a log cabin as a baby, was the daughter of Mary (Cheesbro) and Clark Hewett, who along with Harvey Wells, plowed a furrow from Lime Springs to the New Oregon area to make the first road across Howard County to gain access to the "stage stop" and mail at Decorah. Ella's step-grandfather was M.M. Marsh who started the first mill in Lime Springs.

In 1868, the Brown family moved to Lime Springs where W.C. started his railroad career at the bottom as a "water boy" at the age of sixteen when the railroad was being completed from Conover, Winneshiek County through Howard County to Austin, Minnesota. The family moved to Thompson, Illinois for two years where W.C. worked at the depot wooding engines during the day and learning how to run the telegraph at night. When the family came back to Lime Springs, W.
c. soon moved to Minneapolis where he was a telegraph operator at night for the Milwaukee Road. Another move took him to Waterloo where he was a dispatcher for the Illinois Central. While there, in 1874, he was married to Ella Hewett by his father in the upstairs apartment above her father's hardware store in "the flat iron building" in Lime Springs.

On his way "up the ladder", W.C. worked in Charles City, McGregor, and Des Moines, Iowa for short periods of time and in 1875, he left Waterloo to become a dispatcher for the Chicago, Rock Island, & Pacific at Wilton, Iowa. In 1876, he became a dispatcher for the C B &Q Railroad where by 1896 he became manager of the system east of the Missouri River with offices in Chicago. Brown was noticed by his superiors for handling difficult situations well. It was noted that W.C. walked past armed strikers, threw a switch, and motioned a train to move earning him the title of "little man unafraid". Another time he convinced striking workers to deal with livestock saving them from starving, thirsty conditions. Getting wind of an impending train robbery, he organized a "dummy" train with lawmen hiding in a piano box in the "express car" who took the robbers by surprise. W.C. took initiative with building projects such as the new Rock Island Depot and innovative practices such as "running trains without orders" on double track lines and initiating the Brown Disciplinary System in which credit for good work counterbalanced demerits for poor work.

Brown had the ability to listen to both sides of issues and thus drew trust from both management and workers. This helped him to be not only a mediator in labor issues averting strikes, but he became a consultant to presidents Theodore Roosevelt, William Howard Taft, and Woodrow Wilson in making railroad policies. He was called upon for many speaking engagements during the time when there was considerable controversy regarding railroads being accused of unfair rebating practices and the subsequent Elkins and Hepburn Acts were passed by Congress.

During his rise to the top, the Browns made many moves including St. Joseph, Missouri, and Chicago, Illinois where W.C. engaged in racing trotters and pacers. He had an interest in a horse farm in St. Joseph, Missouri and owned a 360 acre farm in Clarinda, Iowa where he specialized in raising Percherons. He maintained a strong interest in his rural roots and supported experimental farms that in the long run would benefit the farmers with increased production and the railroad with increased freight.

In 1901, W.C. accepted a vice presidency/general manager position with the Vanderbilt's New York Central Railroad. By 1906, he was elected senior vice president of all the 12,000 miles of the New York Central Railroad running from New York to St. Louis, Missouri on the west, to Montreal, Canada on the north, and to Louisville, Kentucky on the south. On February 1, 1909, W.C. was elected president of the New York Central and held that office until tendering his resignation effective January 1, 1914. While president, he was credited with bringing the use of electric trains within the city, bringing efficiency and harmony among the 160,000 employees, and building Grand Central Terminal in New York City. While in New York, the Browns lived in the Langham Apartments and were neighbors of George Westinghouse, Irving Sacs, and Irving Bloomingdale (department stores). The Browns vacationed in cottages in upstate New York and owned a cottage in Harbor Point, Michigan.

Throughout W.C.'s railroad career, the Browns came to Lime Springs frequently living in the house his parents built and looking after the farm from her parents that W.C. developed into the Oak Lawn Stack Farm. just west of "Old Town". W.C. had access to a private railroad car that he named the Herkimer. Lime Springs would be abuzz when the Herkimer with the family and their servants came and parked on its own sidetrack. Sometimes where would be another car or two carrying the Brown's horses and/or auto. The Browns had three daughters; Georgia, Bertha, and Margaret. Margaret and W.C. often rode their horses in the area that today is known as Brown Park in front of the Brown house. When the Browns retired, they spent much of their summers in Lime Springs and their winters in Pasadena, California. Both passed away in California, Ella in 1921 and W.C. in 1924 and are buried in Pleasant Hill in Lime Springs near their parents.

W.C. was generous in donating to local causes during his lifetime, helping friends and relatives find work and/or loaning them money. He left two gifts which remain in Howard County today; the large stained glass south window of the former First Baptist Church (a memorial to his parents) and the pipe organ with the remodeling to house it at the Methodist Church in Lime Springs.

By choosing the right opportunities, working hard, and earning the respect of his peers, he not only rose to the top of his profession as president of the New York Central, overseeing the building of Grand Central Terminal and influencing national railroad policy, but he was consulted by presidents and heads of companies. William C. Brown was able to bring harmony among factions, he was a champion of farmers, frequently praised for his work ethic, integrity and leadership, and he never forgot those he met on the "way up".

Thank you Janice Strike and the Cresco Public Library for your research and writing of W.C. Brown.

William C. Brown comes of Scotch Irish ancestry, his line being traced back to William Brown, who came from England in 1686 and established his home in Massachusetts, where he became a leader in civic affairs of the colony. He served as a judge of the colonial court and was a military officer.

William's son, Captain John Brown was born near Corcord in 1703 and served as a soldier in the French and Indian was, commanding a company in the Louisburg expedition of 1745. He became one of the prominent and influential citizens of his district and was a member of the general court of the colony for twenty years.

His son, Parley Brown, born May 27, 1737, was one of the farmers who responded to the call of Paul Revere on his famous night ride on the 18th of April, 1775. He was in the fight at Lexington and was a member of the company commanded by Captain Seth Washburn at the battle of Bunker Hill in which engagement his brother, John Brown, was badly wounded. Parley Brown carried his brother from the battlefield and afterward went west with the American army under command of General George Washington and was killed in the battle of White Plains, New York on the 28th of October, 1776.

Nathaniel Brown, son of Parley Brown, was born in Leicester, Massachusetts, November 5, 1767 and afterwards became a resident of Vermont, from which state he removed to New York and then a western wilderness. He died in Hamburg, New York in 1854. His son, Rev. Philip Perry Brown, was born in Bennington, Vermont, September 17, 1790 and was a Baptist missionary and preacher of central New York to the time of his death, which occurred in Madison, New York on the 23rd of September, 1876.

Charles Edwin Brown, father of William C. Brown was born February 23, 1813 in Augusta, New York which at the time was situated on the frontier.